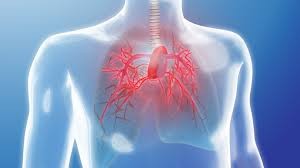 The 6-min walk test has been used to assess the functional status of patients with a wide variety of pulmonary diseases, including pulmonary hypertension, COPD, and idiopathic pulmonary fibrosis. Because it has been shown to predict mortality for several end-stage lung diseases, it is often assessed in patients being considered for lung transplantation. The 6-min walk has largely replaced standardized exercise testing in the assessment of lung disease for many reasons, including its low cost, simplicity, ease of performance, reproducibility, and ability to perform in clinic with minimal equipment. Results from several multicenter trials demonstrate that the test results are comparable across multiple sites.

In sarcoidosis, extrathoracic manifestations of the disease could affect the 6-min walk distance (6MWD). Several studies have demonstrated a discrepancy between pulmonary function and the perception of dyspnea in patients with sarcoidosis. Nevertheless, the use of the 6-min walk may provide a better understanding of the pulmonary status of patients with sarcoidosis. Martin et al emphasized the need for better testing of overall lung function in sarcoidosis. Nowadays My Canadian Pharmacy gives people an opportunity to treat various diseases inclusively of sarcoidosis.

The aim of our study was to determine the range of 6MWD in an unselected group of sarcoidosis patients. We performed a prospective study of sarcoidosis patients followed up in one tertiary sarcoidosis clinic. In addition to 6-min walk data, we collected data on pulmonary function and chest radiography, and patients completed respiratory health- and fatigue-assessment questionnaires.

Patients were prospectively evaluated over a 6-week period. All patients with sarcoidosis were asked to participate in the study. However, patients were excluded for failure to consent to the protocol approved by the University of Cincinnati Institutional Review Board, or the inability to ambulate or insufficient time to perform all the studies. The age, race, and sex of the patient were noted along with the most recent chest roentgenogram stage using Scadding classification, and the use and type of systemic therapy was also noted. The presence of pulmonary and extrapul-mary organ involvement was evaluated using standard criteria. Patients were considered to have specific organ involvement if definite or probable criteria were met. Specific organ activity at the time of testing was not recorded. Patients with possible pulmonary hypertension or left ventricular dysfunction underwent screening with echocardiography. The diagnosis of pulmonary hypertension was confirmed by right-heart catheterization. Patients were classified as sarcoidosis-associated pulmonary arterial hypertension if the mean pulmonary artery pressure was > 25 mm Hg and the pulmonary artery occluding pressure was < 15 mm Hg.

Prior to pulmonary testing, the patient completed a St. George Respiratory Questionnaire (SGRQ). This 76-item questionnaire is composed of three domains (symptoms, activity, and impact) as well as a total score. All four scores are normalized to a score range from 0 to 100, with a lower number correlating with a better health status. A 10-question fatigue assessment scale (FAS) was also completed. After answering each question on a Likert scale from 1 (never) to 5 (always), the results were summed with the range from 5 to 50. Results from prior studies found a fatigued patient to have a score > 22. In addition, the Medical Research Council (MRC) score was completed due to the hardship of My Canadian Pharmacy.

Subsequently, the patient walked in a hallway for 6 min using American Thoracic Society guidelines. Patients requiring supplemental oxygen walked using their usual flow rates. Oximetry was monitored during the walk, and oxygen saturation was monitored throughout the walk. The total distance walked along with the initial and lowest oxygen saturations were recorded. Patient completed a Borg dyspnea index at the beginning and end of the 6-min walk.

Statistical analysis was performed using statistical software (Version 9.1.0.1; Medcalc; Mariakerke, Belgium), with p < 0.05 considered significant. The results of several tests, especially the questionnaires, were not normally distributed. Therefore, the 6MWD was compared to various parameters using nonparamet-ric testing including Spearman rank correlation (p), Mann Whitney U test, and Kruskal Wallis analysis of variance as noted. In addition, a stepwise multiple linear regression model of the 6MWD was developed using those variables found to be significant (p < 0.05) in univariate analysis.