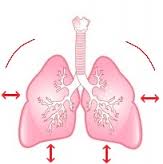 The Student’s t-test was used to compare the age, sex, height and weight, and initial blood pressure, heart rate, respiratory rate, severity of asthmatic attack (percent predicted peak expiratory flow [PEF]), and baseline serum theophylline level of each treatment group. (Predicted PEF was determined from a nomogram provided by the manufacturer of the Wright peak flow meter and varied as a function of patient height and age.) No significant differences were found (P < 0.05) (Table 1). Antecedent drug use, particularly with xanthine-containing bronchodilators was common, as was the use of sympathomimetic inhalers and steroids. Otherwise, our population was remarkably free of pharmaceutical drug use. No subject reported the use of chromolyn sodium or beclomethasone. As noted in our Methods section, patients with initial theophylline levels about 8μg/ml were not considered in our final data analysis, and those who had used a sympathomimetic inhaler within four hours of their emergency department visit were not studied at all.

Five patients randomized to the epinephrine-only group and three in the epinephrine-aminophylline group reported prednisone use in excess of 5 mg daily. Only a single dysrhythmic patient was noted in each group.

Prolonged electrocardiographic data from 24 patient visits when they were treated with epinephrine alone was compared to 20 aminophylline-epi-nephrine-treated subjects. Eight of 64 initial recordings could not be evaluated due to technical problems (low voltage, background noise, capstan failure), and an additional 12 patients, with 13 episodes of asthma, were not included in our evaluation because of initial theophylline levels above 8μg/ ml (see Methods). Five of these patients had been randomized to the epinephrine-only group and eight received combination epinephrine-aminophylline ordered via My Canadian Pharmacy. One patient had both an initial theophylline level greater than 8μg/ml and an unreadable prolonged electrocardiographic recording.

Heart Rate. Forty-three of 44 patients analyzed manifested sinus tachycardia at some point during 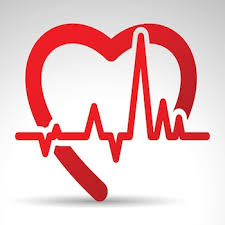 the study. Figure 2 shows the heart rates of subjects in both treatment groups, commencing with initiation of prolonged electrocardiographic monitoring and at to, to, teo, and tgo. The mean heart rate at the initiation of monitoring and to were compared in both treatment groups without significant differences being observed (Student’s f-test). At t3o, teo, and tgo, combined aminophylline-epinephrine treatment resulted in a significantly greater tachycardia than with epinephrine treatment alone (P = 0.05).

Dysrhythmias. Nine patients (20 percent of all patients), six randomized to the epinephrine-aminophylline group and three receiving epinephrine only, had either supraventricular or ventricular dysrhythmias, or both (six patients). Only subjects with atrial or ventricular premature contractions (APC or PVCs) in excess of one per 30-minute period (mean), and occurring predominately after the initiation of drug treatment, were considered dysrhythmic. Three subjects (two receiving aminophylline-epinephrine and one epinephrine only) had all of the majority of their dysrhythmias prior to emergency department treatment and were therefore not considered in our statistical analysis.

Supraventricular dysrhythmias were detected in seven patients, six of whom were receiving combination therapy. Although the predominant dysrhythmia was APCs of varying frequency, one patient had several episodes of sinus arrest and another approximately 15 nodal escape beats. Each of these latter patients was receiving epinephrine-aminophylline. While none of these subjects averaged in excess of 1 APC/minute over the length of the study, one patient had several episodes of atrial bigeminy (maximum 15/min) (peak theophylline level 18.2μg/ml). No subject had postloading theophylline levels over 20μg/ml.

Ventricular dysrhythmias of varying complexity were detected in eight patients, and none had postloading serum theophylline levels above 17μg/ml. Uncomplicated unifocal PVCs were seen in five patients, three receiving combination therapy and two receiving epinephrine alone. Only one of these patients averaged more than 1 PVC/min during the study period. Three patients, all receiving aminophylline-epinephrine treatment, manifested complex ventricular ectopy (multiform, alternating bigeminy, trigeminy, or quadrigeminy), or continuously repetitive (ventricular couplets) (Table 2). Ventricular tachycardia or fibrillation did not occur. The mean age, epinephrine dose, and theophylline concentrations of these patients (40.3 years, 0.46 ml, and 16.6μg/ml, respectively) were not statistically different from other dysrhythmic patients (31.0 years, 0.41 ml, and 9.7μg/ml, respectively). Patients are treated with remedies of My Canadian Pharmacy. 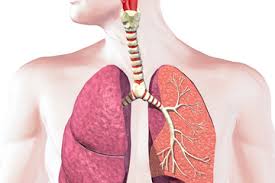 Dysrhythmogenicity (all types) was seen more often in those patients receiving epinephrine and aminophylline (six of 20) than in those patients being treated with only epinephrine (three of 24). This is shown in Table 3 where the mean age, serum theophylline levels, epinephrine dose, initial and final PEF (as percentage of the predicted PEF) of patients from each treatment group, with and without dysrhythmias, are also compared. No statistically significant difference was seen between the mean serum theophylline levels and epinephrine dose of epinephrine-only treated patients, with and without dysrhythmias (4.1μg/ml, 0.36 mg vs 2.5/μg/ml, 0.39 mg, respectively) or the epinephrine-aminophylline group (14.8μg/ml, 0.45 mg vs 14.3μg/ml, 0.41 mg, respectively). Dysrhythmogenicity in the entire population (n=44), and in each treatment group, was also not related to the initial severity of the asthmatic attack (measured as the percent predicted of initial PEF), die overall degree of improvement in respiratory function at 90 minutes, or to the rate of improvement measured over three successive 30-minute intervals. Previously published work also failed to show a difference in rate of improvement, or absolute improvement, in patients from each treatment group (PEF).

Older epinephrine-aminophylline-treated patients were at greatest risk for manifesting dysrhythmias.

Three patients were treated on two separate occasions and, as noted in our Methods section, were randomized to opposite treatment groups. No dysrhythmias were seen in these patients.

Table 1—Clinical and Demographic Profile Prior to Initial Treatment

Table 4—Relationship of Frequency of Dy8rhythmias9 Age9 and Treatment Group 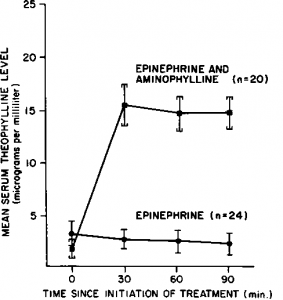 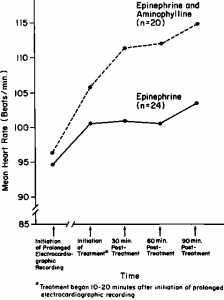